skip to main | skip to sidebar

The Eagle Has Landed!

The Warren book is hereby born and on shelves as of April 5th. A friend told me to throw open the window and yell out that I am a published author! Never thought of that, but it sounds fun.

It's been a busy decade scrambling for just the basic in life here in Michigan. I miss always having work in New York City but not sure I could just move back when I am able to do that some day. Maybe that Prince of Wales Architectural doctoral program would suit me just fine in a couple of years.

Anyway, all I really want to do now is to continue to write, arrange speaking engagements for historic preservation groups and others that want to know more about a house, building, or community, and to do anything in the area of curatorial work and educating the public on an area's heritage.

I teach online as well and really enjoy that, but miss the on-ground classroom setting. That immediate human connection is what seems to be missing from many of our lives these days on a regular basis.

Well, off to do some book promoting - happily, advance sales have been brisk!

All good things ~
Posted by Martha at 6:30 PM No comments:

Sorry for all caps, but I cut and pasted this from another thought all in caps.

HAVE YOU EVER READ BRIAN WEISS? I'M NOT SURE IF YOU'D LIKE HIM OR NOT, BUT HE'S A REALLY CONVENTIONALLY TRAINED PSYCHIATRIST WHO WAS SENT A PATIENT DECADES AGO. HE TRIED TO GET TO THE ROOT OF HER SYMPTOMS THROUGH HYPNOSIS AND SHE WENT WAAAAY BACK TO SOME OTHER TIME. THEY WORKED WITH THAT, AND HER SYMPTOMS WENT AWAY. HE STARTED STUDYING AND LOOKING FURTHER INTO IT AND SOME OF THE CASE STUDIES OF HIS ARE ABSOLUTELY AMAZING.

Went to a webinar yesterday. It felt great to be involved on a professional level with family council and staff issues. It is hard to get a facility interested in actual growth of a council that wishes to be a force within that community. They need it for their own high ratings, but the benefits to the families go well beyond a group that meets once a month. And benefit to the facility in improvements that will also bring those high ratings. They should be real care centers.

The closer people are to their loved ones care, the more they should be a part of the council. Families that are away or otherwise do not visit much, of course tend to think that things are fine and their loved one is in "good hands", which almost a dangerous misconception. I spoke with a family member recently and he said he didn't wish to participate in a council because he's furious about some of things going on with his loved one's care. That is EXACTLY why he should join. The purpose is not to just sit around and talk about how great everything is; there are positives of course, but they're largely cosmetic. Issues of daily hygiene are the issues that seem to be the biggest issues at my Dad's facility.

JOIN in a be a part of making your loved one's care better. Just because they are surrounded by staff does not mean anyone is paying attention to them individually. Someone once said that their care is only as good as the family (or beloved friend, etc.) that can be there all the time. This is very true. It is a business. Some are more caring than others, but there are plenty of staff that are simply doing a day's work. For facility caregivers whose hearts are in their work, they are irreplaceable and make all the difference in the world. These are people that know how to put themselves in someone else's shoes - that could be any one of us some day. Wouldn't you want someone to care about who you were, how vital and talented, wish to talk about that, find your interests, cherish your wisdom and experiences if only in years on the earth?

JOIN to make your skilled nursing facilities the centers for caring that they are meant to be.
Posted by Martha at 8:33 AM No comments:

MSN Lifestyles Most Influential Women of the Year

Okay, I'm fuming. There was a nice balance of celeb types, politial types, and humanitarian types but .... how the h@$% could they leave out Michelle Obama?! Was this so obvious that they forgot to add her? If our first African American First Lady of the United States doesn't make the cut, we have really lost our compasses. Didn't see a place to post a comment there, so I came here instead. Did anyone else notice this?
Posted by Martha at 8:30 AM No comments:

I am an artist, designer, educator, historic preservation professional and author - most recently of "Warren" in the Images of America series for Arcadia Publiching. As the third largest city in Michigan and as popuular as this book series is, I was surprised no one had done this before now! Hope it will "fly off the shelves" beginning on April 5, 2010!

I was writing the book proposal when my mother passed away in June 2008 and decided to use my full middle name on the cover (her first name) in her honor. Another surprising tribute to her is the publication date just two days after her birthday.

I spent 23 years in New York City and a shared experience with those of us who made our lives there, is that it can be (and was for me) an education at the highest level - the good, bad, and ugly in evidence every day at one's fingertips. In the arts, all related arts are available as if "knowing" is just understood. For instance, work in television production introduced me to others in production, aspiring talent of all kinds, and freelancers moonlighting on Broadway productions or Carnegie Hall events, or high-profile special events. It was just a daily occurrence to visit this one backstage during a production, or that New York Philharmonic rehearsal... So easy .... and so taken for granted!

1999 saw me packing my earthly goods and heading to Michigan to be there for my parents as their need for care was just beginning to show. Proud of my acocmplishments over the years in a number of areas, I was sure there would never be a lack of work... not me, not with my skills....

2009 - ten years later, there have been credentials gained here that rounded out my experiences on the east coast. But the 2009 economic conditions in America have made work almost as challenging as caregiving on a more-than-full-time basis. I suppose I needed to be as strong in myself as a person physically, spiritually, financially to "go home again," I am now updating Thomas Wolfe's classic to pose some questions and theories posed by Wolfe long ago. I will never regret being here when my parents needed someone to advocate and oversee the details of their lives.

I am ready to give care, to create, and to push forward in 2010 - "the year to begin again" ! But I ask you... CAN one go home again? As babies are brought into the world in which they are born, doesn't it perhaps make more sense to bring parents into the lives we adults have established?

What are your thoughts?
Posted by Martha at 9:49 AM No comments: 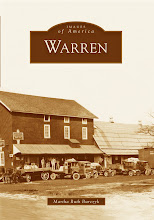 Share your photos & stories by clicking on the book!

Martha
NYC resident for almost 25 years; it's true that when it "gets in your blood" nothing else compares. Worked in television production (CBS, NBC, ABC) and feature film production (IATSE member), did freelance graphics, architectural interior design, cosmetic company buying (imported gifts and various packaging components). I COME FROM a very musical and artistic family and started to play classical piano at a young age. Mother Ruth Burczyk was a pianist and teacher in Grosse Pointe, Michigan for over 50 years and impacted the lives of so many in the area. One tends to forget that until so often running into friends and former students. CAREGIVING for my parents brought me back to the Detroit area where I grew up. HAVE BEEN HERE during the worst economic decade in Michigan history and nationally since The Great Depression but managed to teach design at the college level, earn an MS in historic preservation, and author this book. WARREN can now take its place among the many books in this book series; volume two is under way!